The Ballad of Daniel Bray

Daniel Bray was a captain in the Second regiment of the Hunterdon
county militia. He was born at Baptisttown, Hunterdon county,
N. J., October 12, 1751, and died at Kingwood, in the same county,
December 5, 1809.

Washington abandoned Jersey in the early part of December,
1776, the last man of the rear-guard under Lord Stirling reaching the
Pennsylvania shore on December 8th, about midnight. To prevent the
passage of the British, all boats had been removed from the Jersey shore; but Washington soon had far deeper plans in mind; he wished a little fleet of boats collected so that he and his army might recross the river at will.

Accordingly he summoned Captain Bray and directed him to
gather secretly all the river-craft that could be found on the Delaware
from Phillipsburg downward.

Associated with Capt. Bray in this undertaking were Capt. Jacob
Gearhart and Adj. Thomas Johnes; these three met at Baptisttown, about three miles inland, to make their plans and engage the assistance of others. They worked at night disguised as hunters; and no easy task it was to find the boats hidden away in creeks by their owners, to cut them out of the ice and to keep them from being swamped in the rapids while taking them down the icy current in the darkness.

Capt. Bray and his companions worked at this for ten nights and
succeeded in collecting about twenty-five craft, including fourteen Dur
ham boats, four scows and several rafts for the transportation of cannon; all these they hid behind Malta, a heavily-wooded island opposite Lambertville.

Thus were the boats gathered for Washington s famous crossing. 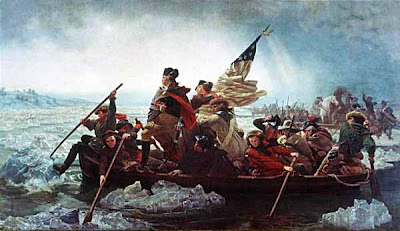 THE BALLAD OF DANIEL BRAY

The Delaware, with stately sweep,

Flows seaward as when armies fought:
But they who struck for freedom sleep

Beneath the soil their valor bought.
At Rosemont, inland, Daniel Bray,

In lonely grave, with rest hard won,
Waits for his country s voice to say:

At Trenton lay the Hessian host,

Pluming their pride with gay parade;
They thought the freeman s cause was lost

And hoped his last brave stand was made;
But safe on Pennsylvania s shore,

To Captain Bray on Kingwood height

A horseman sped by field and brake,
Till on his door, at dead of night,

He knocked, and bade the soldier wake s
A hasty mount, a quick farewell,

And then miles down the frozen track,
Like musket shots the hoof-beats fell,

While Mary slept and dreamed him back.

Down Stony Batter Hill they sped,

Across Duck s Flat; then up the slopes
To Rittenhouse (where sleep the dead)

Their coursers climbed with steadier lopes ;
The ten-mile creek is left behind,

Gilboa s slant is swiftly run;
At Coryell s the inn they find,

And waiting them, great Washington.

"Seize all the boats from Easton down,
And guard them safe, by night and day,
Until we cross to take the town."


The echoes of a noble voice

Hied with him from that meeting place,
Praise made the soldier s heart rejoice,

And spurred his zeal to quicker pace

He ranged a circuit twelve miles wide,
For brave Gearheart of Flemington,

And Johnes of Amwell countryside.
To foil the Tory s cunningness,

With squads in hunter s garb uncouth,
They pierced the Jersey wilderness,

From Ringoes to the Lehigh s mouth.

Then downward on the broader stream,

They drove by night their project bold,
With but the planet s wintry gleam

To cheer them in the bitter cold.
December s slashing wind cut keen

O er ice-cakes massed with frosty grip;
And longside, in the dusky sheen,

Beneath the river s gloomy banks,

And where the friendly ferry plied,
They seized the craft with scanty thanks,

And launched them on the swirling tide:
Through eddies deep, and rapids swift,

They guided sure their precious fleet;
Minding the rock and treacherous rift,

And creeks where angry currents meet.

No hostile shot disturbed the verge,

Where ghostly woods loomed drear and dark
No voice, except the hound s sad dirge,

Or, far away, the wolf s gruff bark;
But sometimes cross the distant slope,

A farmhouse shed its candle ray,
And warmed the wand rer s heart with hope

The river s speech is low and weird,

It bears no tales of deeds long past ;

But Bray, ere morning light appeared,
His boats by Malta Isle made fast;


And on that famous Christmas night,
They bore the heroes o er the tide,

Who broke the spell of Britain s might,
And flung the Hessian mob aside.

The Delaware shall ever flow

And every free-born child shall know
The tale of Trenton s victory:

And till the stars shall cease to shed
Their light o er hilly Hunterdon,

Of Daniel Bray it shall be said:

JSBray
Hello everyone. I have moved my blog over to WordPress with my website. Link is below. https://momentsfortheheart.com/blog/